Lots of people have asked about this paper (which I think is open access).

To cut a long story short, it's not silly - the authors are entirely respectable and the work is interesting - but I don't think it is really that credible in terms of overturning established consensus. In fact it looks to me like they've gone astray in a few ways which add up to provide plenty of reasons for doubting the result.

The underlying idea is interesting enough and I have no problem with it in principle. They looked at climate change over multiple glacial cycles, to estimate not only the climate sensitivity, but also tease out how much this varies with temperature. Their observed temperature record comes from a handful of long-term proxy records of sea surface temperature, just 14 in total, which do not give very good global coverage. So they start by calibrating these records to a global mean temperature by comparing the local (proxy location) to global temperature at the last glacial maximum as simulated by models. The LGM temperature change arising from their 14 proxy records scaled to global temperature is about 5C colder than pre-industrial. This is a fair bit colder than the 4C we got with 400 data points over both ocean and land. But not content with this, they then average it with the mean of the PMIP model simulations, which is 6.5C colder than PI, thus getting a cooling of almost 6C.

Edit: Thanks to an email from Axel, I've had a more careful read and the above is wrong. One estimate is the PMIP models scaled to match data ("proxy-based"), another is their LOVECLIM simulation scaled to match a different data set ("model-based").

It is probably defensible to use the PMIP models in this way as some sort of independent estimate of the LGM state, but surely it is inconsistent to not then also use the PMIP models to estimate the cimate sensitivity and/or its nonlinearity. Anyway, this cold LGM state feeds through into a high sensitivity. An important additional factor here is the nonlinearity which they diagnose by comparing temperature to net forcing throughout the time series. I think a fair bit of this nonlinearity relates to the very high interglacials which are at best poorly calibrated since they only calibrated the proxy records to a fully glacial state. Interglacials have much smaller global temperature signal compared to the present, with the regional differences being much more important, and it seems doubtful whether a single scaling applied to these 14 proxy records could represent the true relationship with adequate precision for their purposes.  In support of this, the last interglacial appears to have extremely high warmth in their calibrated proxy record of some 3C above pre-industrial, which I don't think is widely accepted. On the other hand, some nonlinearity is probably quite plausible, so let's press on. Using the "warm" sensitivity of 4.9C/doubling, they then generate a transient prediction, using a simple energy balance with the ocean heat uptake factor again taken directly from the CMIP models.

Disappointingly, their plot of the transient warming from 1880-2100 doesn't show the actual observations up to the present. It is hard to be precise from eyeballing a computer screen, but it looks to me that their new improved prediction is already way ahead of observations. It suggests a warming that first reaches 1C (relative to 1880) back in the early 1990s before Pinatubo, rebounding from that brief dip to reach about 1.5C by the present. HadCRUT4 shows rather less warming that this, with even the current extraordinary hot year (boosted by a strong El Nino) not reaching 1.2C on that anomaly scale. In my view failing to show, or discuss, this discrepancy is a major failing of the paper. If they think it can be explained by internal variability then they should have presented that discussion and I'm surprised the reviewers let them get away without it.

Edit: ok, here is a very quick and dirty attempt to show what their pic would have looked like with real temperatures on it: 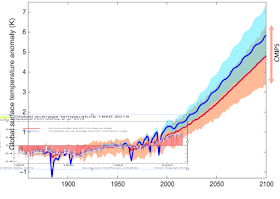 Not a great graphic, I just scaled the hadcrut pic off here and tried to line it up with the authors' own axes, matching the baseline temps around the end of the 19th century.  As anticipated, recent years are well below their prediction, with 2016 just about reaching the CMIP mean.

Edit: Axel claims that internal variability can explain this discrepancy, but I don't believe it. The magnitude of decadal-scale internal variability is about 0.1C (Watanabe et al 2014 and Dai et al 2015) and this new forecast would be even hotter if it wasn't also hugely overestimating the response to volcanoes.

So, in summary, nice try, but I don't believe it, and I don't really think the authors do either.

[Blog post title inspired by the Mark Lynas quote which is not the authors' fault. Incidentally, it is disappointing to see journalists falling for the parasitic publishing scam in which "one of the most respected academic journals" cashes in on its name by setting up numerous sister journals which share some elements of the name but neither the editorial policy nor barriers to entry. "Science advances" is not Science and it's only been around for a year or so, nowhere near long enough to have any sort of reputation. But if journalists don't know the difference, scientists will happily pay the steep publication charge and reap the publicity benefits. Nature have been doing this for a few years now (eg Nature Communications) so it's hardly surprising Science have followed suit.]
James Annan at Friday, November 11, 2016
Share